On 6/10/17 1132 hours, Harrisburg Police were assisting with the Act For America Rally on the Capital steps of N 3rd & State Streets.  During this Rally part of the protestors moved from the capital steps north bound on N 3rd Street throughout the midtown area.  Multiple mounted PSP Troopers and Harrisburg Police were assisting with moving a large crowd from blocking the 1200 BLK of N 6th Street towards the sidewalk.

A PSP Corporal and his partner, horse Sampson, were attempting to move the crowd when the defendant, Lisa Simon , used a flag pole with a silver nail at the top of the pole to strike horse Sampson in the side of the neck.  Simon did this while obstructing the troopers from performing their duties to move the crowd onto the sidewalk.

Simon resisted Harrisburg Police officers from effecting a lawful arrest.  Both the PSP Corporal and horse Sampson were able to continue working with minimal injury.

I’m not sure when the law enforcement agencies will stop following their puppet masters’ orders and put an end to the chaos and violence Communist groups like Antifa are premeditating, but I do know that as long as the media is silent and the cowards are allowed to wear masks and damage property and attack innocent people, eventually a much stronger force from the right will show up to one of their events and put an end to them once and for all. Veteran groups, active military, current and former law enforcement or even biker groups need to make a stand. Enough is enough!

Numerous ANTIFA and other terrorists are currently planning to “disrupt” the International Association of Chiefs of Police which will be taking place in Philadelphia, Pennsylvania from October 21 – 24, 2017. This is ironic as the media and law enforcement have protected them for many years and without police protection, they’d have never been able to leave their keyboards:

Confront the IACP in Philadelphia this October

This October, the International Association of Chiefs of Police (IACP) will hold their annual conference in Philadelphia. This is a call for an ambitious mobilization to directly disrupt the conference, to publicly spread an explicitly anti-police position, and to attempt to open up space that is hostile to state control. We hope to do so using both coordinated and decentralized, autonomous actions in the area immediately surrounding the conference in Center City and throughout Philly.

The IACP brings together law enforcement agencies from throughout the world to “advance the science and art of police services” through international coordination, training, and policy work. Their 2017 conference will take place at the Pennsylvania Convention Center, with four days of workshops, an exhibition hall with corporate vendors, and a number of secondary events at other locations. Also, a “general assembly.”

This call for opposition comes from the perspective that policing is inherently a colonial, white supremacist project. From their inception, the police have had as their primary function the maintenance of a social order based on violent domination along lines of race, gender, class & ability; from slave patrols to strike-breakers and from vice squads to gang units. Opposition to the IACP presents a unique opportunity to advance a position that is absolutely against all policing, as a large part of the organization’s agenda mirrors that of those who would reform the institution. Body cameras, diversity in hiring, “trust and accountability,” and above all, “community policing” are all central themes of the conference and to recommendations for “21st Century Policing.”

As the Trump administration (universally endorsed by law enforcement unions during the election) bombastically seeks to reinvigorate the militarization of police, it is a crucial time to aggressively put forward an analysis that recognizes militarization and community policing not as divergent, but as complementary parts of a coherent strategy of domination.

Meanwhile, the hundreds of participating agencies and workshops starkly demonstrate the severe intersectionality of the violence the police have always carried out. Interlocking movements for black liberation, indigenous struggle against colonization, sex workers’ self-determination, resistance to ableist police violence, radical political movements resisting repression, queer rebellion, global anti-imperialism, migrant and refugee justice and no borders movements, housing justice, environmental struggles, and more, all have a stake in opposing the strategies and tactics that will be promoted at this conference.

The IACP conference puts on display what we know from our daily participation in diverse forms of resistance: that every struggle is a struggle against the police.

While all the departments involved have histories of (and foundations in) violence, many have also seen fierce resistance to that violence in the recent past. Participating departments from Albuquerque, Chicago, Milwaukee, Seattle, the Bay Area, and more have seen rebellions against them in the last several years. We hope to use this opportunity to build connections with those who carry these memories of antagonism towards the police and contribute to lived experiences of uncontrollable revolt.

A complete list of presenters, vendors, and workshops is available on the conference website, http://www.theiacpconference.org, but here is a small sampling of some notable participants:

• Robert Metzger, Chief of Pasco (WA) Police Dept. (presenting “Public Trust After a Police Use of Deadly Force Incident,” based on lessons on maintaining stability after the police murder of Antonio Zambrano-Montes)

Expect more information and specific calls soon. In the meantime, save the date, make plans, study some maps, learn the terrain and spread the word throughout the region and beyond. Here are some more detailed resources to get started:

Against White Supremacy // Against the Police

For a world without cops, prisons, or borders.

Is this not a sight for sore eyes? The blimp known as Daryle Lamont “Dirty Daryle” Jenkins of The One People’s Project and The Droogettes together. I don’t know what’s more sad – the monkey face at the left, fat ass Daryle or the cross-eyed bull dyke at the right… what do you think? 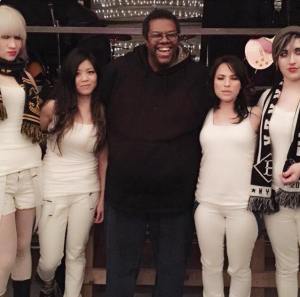 Daryle Lamont Jenkins and The Droogettes

Daryle Lamont Jenkins of the One People’s Project is announcing that he will be attending a benefit concert at “The Factory” in Collingswood, New Jersey on Saturday, April 11 at 7:00pm. The address is 13 Fern Avenue, Collingswood, New Jersey 08108. Communist band “The Droogettes” will be playing. If you’re interested in calling “The Factory,” their phone number is 856-240-1584. Their Facebook page is: https://www.facebook.com/thefactorycolls 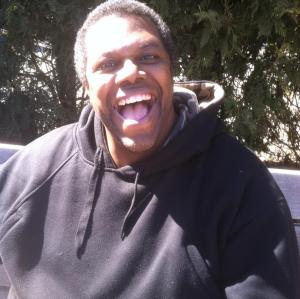 Do you think Daryl Lamont Jenkins would make a good Fat Albert or a better Free Willy stunt double?